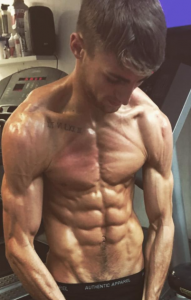 It is often said by ‘experts’ that all the nutrients needed are obtained from food, if and it’s a big ‘if’ a person ate very, very well e.g. single nutrient foods with very little processed rubbish and optimal amounts of clean water were consumed then this person could be very healthy. A combat athlete on the other hand even if their nutrition was planned and executed in this way would still find it almost impossible to get everything that they need from the food. Obviously if excellent health is non existent then operating at their genetic ceiling for elite level sports performance is impossible but even then, as a fighter there is a big difference between being very healthy and taking on board all the nutrients needed to be the best in the world.

In this day and age this type of supplement seems to be used more often than not. Ideally pre-workouts should be used only when the fighter has not had enough sleep and it would be dangerous for them to do a hard training or sparring session. If a fighter starts to rely on this type of supplement then it will begin a vicious cycle of being ‘tired but wired’ with the inability to train without stimulants.

While it might not give quite the same ‘buzz’ a strong cup of filtered coffee could be a much safer alternative, plus coffee does also offer health benefits.

Another major reason why a pre-workout supplement might not be the wisest choice is that there have been some that have been found to contain substances that are banned by some sporting organisations, plus others have been shown to contain amphetamines or the party drug DMAA.

Not all pre-workout supplements contain stimulants; some only contain ingredients that are advantageous for a superior workout.

There are pre-workouts supplements available that have been through an extensive testing process to avoid the possible failing of drugs tests due to dubious ingredients, these supplements are ‘NSF Certified’.

The more resistance training a fighter has in his programme the more protein he will need, this will increase with intensity, volume and application of the big compound lifts which would be included in a well structured programme.

There are various forms of protein powder some are better than others and a persons choice may be affected by other variables e.g. vegetarianism.

There is much debate as to the timing window immediately after training in which protein should be consumed but a sensible approach would be a protein shake as soon as possible after training and then a meal rich in high quality protein and carbohydrates as soon as hunger kicks in.

Whey protein is the preferred choice for supplementation.

The 3 main choices when selecting a whey protein powder are:

Whey Concentrate is the cheapest of the three. It is around 80% protein and does contain high lactose levels.

Whey Isolate is more expensive; it consists of over 90% protein and is generally 99% lactose free. The best form of isolate has been converted from concentrate using cross flow microfiltration.

Whey Hydrolysate is the most expensive and contains digestive enzymes and is reported to be absorbed by the body faster.

There are several types of creatine available on the market, being:

Creatine Monohydrate has been shown to be far the best form.

Benefits for a fighter are:

For a fighter the ability to reduce fatigue while maintaining high levels of force and so continuing to be explosive means creatine supplementation is invaluable.

Something that a fighter will have to take into account when supplementing with creatine is that it helps the body’s cells retain water, which has a positive effect on performance but the downside to this is that the fighter will have a higher body weight, so ideally creatine supplementation will stop around 6 weeks before making weight.

L-Leucine can help you retain muscle while making weight, there is a narrow window lasting under 3 hours for l-leucine supplementation, with an initial post-workout period of inaction lasting around 30 minutes.

For a fighter preparing for a fight, the use of whey protein high in BCAA’s, BCAA’s and l-leucine would be valuable when training for strength, explosiveness and/or changes in muscle size.

The results of the many studies done on beta-alanine are mixed but it seems that an athlete such as a fighter that has to have a high level of power-endurance with the ability to generate explosive power over repeated efforts would benefit.

However a study was done in Wales by Donovan T. et al (2012) found that supplementation with Beta- Alanine using 6 grammes per day for 28 days significantly improved punch force and frequency in elite amateur boxers during a simulated contest. An increase in punch force of approximately 20kg was found and an additional 5 punches in a 10 second period measured. Another benefit to a fighter is that the study found no side effects or weight gain.

Adaptogens help to keep the body healthy while under stress and when used in sport can enable the athlete to train harder, for longer and promoting faster recovery and so avoidance of overtraining.

Caffeine was a banned substance through the World Anti-Doping Agency (WADA) until 2004. It is not advantageous to depend on a substance such as caffeine as a training stimulant. The more the athlete uses, the less of an effect the caffeine has and excessive use will lead to adrenal fatigue.

Galanthamine – Has been shown to improve striking force, reaction time and starting strength.

It has also been shown to increase reaction time, striking force and Rate of Force Development (RFD). It has been shown to improve fine motor skills and mental sharpness.

Appears to have cognitive enhancing properties. It raises growth hormone production and one study showed that it increased power output.

600mg Alpha-GPC supplementation prior to a power test, reported a 14% power output improvement relative to placebo when taken 45 minutes prior to activity (Ziegenfuss, Landis & Hofheins, 2008).

Taurine – An amino acid that has been shown to improve muscle contractions in explosive situations and reduce muscle fatigue in endurance events.