How should it be done? 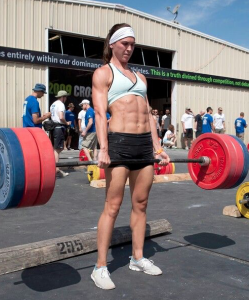 The deadlift strengthens the whole body, protects against injury and transfers well to everyday activities.

The deadlift works just about every muscle in the body with the primary muscles used being the largest – the hamstrings, glutes and quads. This making it an excellent exercise for fat loss especially when doing high volume. Because of the amount of muscle used in the lift there is an elevation of the metabolism so calories continue to be burnt at a higher rate post workout.

Get proficient at the deadlift and great strength will follow.

Not only is the deadlift a great lift for becoming strong it’s also a great lift for packing on muscle. The lifter can really push for an improvement in weight lifted because as long as technique is good then there is very little danger of injury, no spotters are needed and at the point of failure the bar can be dropped.

Deadlifts are one of the best exercises for abdominal development and as long as the abs are not covered in fat then the results will be visibly much better than any abdominal isolation exercises.

The good thing about the Barbell Deadlift is that very little equipment is needed. A good quality bar is recommended, as with anything else you get what you pay for and you should get the best that your budget allows. For this lift there is no need to use a more expensive competition Olympic Bar which has more ‘whip’ and is the preferred bar for Olympic lifts. A bar like the Rogue Ohio Bar or the Texas Deadlift Bar are ideal.

Good quality bumper plates are excellent but really strong guys may prefer Powerlifting discs, which are thinner metal plates and which enable more weight to be added to the bar and so the discs will also be closer to the centre.

Stance width, narrower than the squat, the bar should be over the mid-foot. From here a vertical bar path can be maintained with the line of force directly over the mid-foot. Foot position should be what feels comfortable, taking into account fick angle (natural foot flair). It would be detrimental to force someone to point their feet straight ahead if this then forces their knees to be slightly rotated inwards.

It is not a squat, the hips should be slightly higher than the knees. An ability to hold a good hip shoulder line and hold an active lordosis with a neutral curve is needed. A mistake that many people make to ensure they don’t round their lower back is to anteriorly tilt their pelvis. This causes a loss of ROM because a large part of hip flexor ROM is used resulting in jamming up early at the hip. Also there is increased compression of the lumbar facet joints. 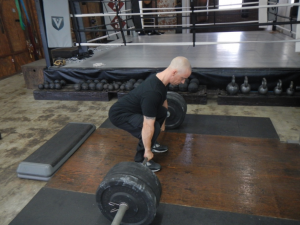 Acromion – lateral extension of the scapula, forming the highest point of the shoulder, this is the point that should be over the bar. If this point is behind the bar the hips will be too low and if it’s in front of the bar the hips will be too high. Once the lifter knows how this position feels they will be able to find it every time. The key to lifting well is staying tight. Slightly lifting the toes while addressing the bar puts a lot of tension through the fascia all the way up the back of the legs, tension is built on the way down before grabbing the bar. 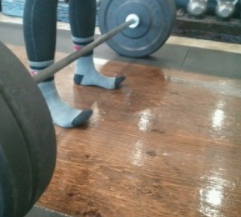 This technique limits forward knee progression and stops the lifter being too upright, so now recruiting more hams and glutes and less quads. The hips can now move back away from the base of support instead of just dropping down and so much more tension can be created. Grip the bar so tight that the knuckles turn white creating tension not just in the arms but the mid-section will also brace, a holding of breath and clenching of the teeth will potentiate the nervous system and increase the body’s ability to generate force. Before gripping the bar a big breath is needed to fill the abdominal cavity with air.The chin needs to be slightly tucked. Just before the weight is lifted from the floor there is a point where the bar rises inside the plates and a clicking sound is heard. The lifter should feel nice and tight with the weight passing down through the mid-foot to heel, this is the point at which the lifter should know whether to go ahead with the lift or stop and readjust.The first stage of the lift is similar to an Olympic lift in that the bar is raised while the hip to shoulder line remains the same. As the bar is lifted the knees go back and the line of force remains over the mid-foot. The second part of the lift happens once the bar clears the knees, instead of continuing to lift the bar vertically the lifter performs a horizontal hip drive. It has to be noted that it is hip extension not extension of the lumbar spine. A good coaching point is to contract the glutes at the top instead of leaning back. 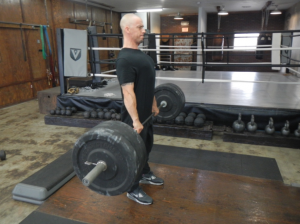 Lowering the bar should be a mirror image of when the bar was raised. It should look very similar to a Romanian Deadlift until the bar clears the knees and once it is below then the hips can drop down again to the correct starting position.

It is probably best when not lifting maximal loads to use a pronated (overhand) grip. An alternate grip can be used but if lifting high volume it would be wise to alternate the grip every set to avoid creating imbalances. An alternate grip can be used for maximal load low rep sets because it enables the lifter to move more weight because it’s harder for the bar to roll down the fingers.

There are those that advocate not using a mixed grip at all, much preferring to continue with a pronated grip and adding straps to aid with any potential grip problems. This is an excellent view that is difficult to argue with as the potential for biceps injury in the arm using the underhand grip is quite high.

One point that needs to be noted is that if straps are used then the lifter should remember to still ‘white knuckle’ the bar, in order to still create the same level of tension and potentiate the nervous system, also reducing the chances of injury that could arise from relaxed musculature while performing this very demanding lift.

It is advisable to use chalk for deadlifts, if it’s difficult to use chalk in the facility because of the mess that can be made there is a product called Liquid Chalk which works the same but with none of the mess.

The best footwear for deadlifts are those that have a thin firm sole such as chucks (converse), five fingers or even performing the lifts in socks or bare feet.